I am having such a wonderful consumer experience flipping through my slowly reducing pile of House and Garden magazines prior to tossing them into the bin. Immersed in the evocative imagery on the page, I forget that I am living in Brisbane and am transported off to the avenues of beautiful shop fronts in Paris, London and New York. The pages with their entrancing pictures morph into creative window displays enticing me into the salons and ateliers displaying create and desirable objects. Resistance is impossible, their lure stronger than the sirens were to Odysseus. I am not sure this form of window shopping is any cheaper as I am finding lots of beautifully crafted pieces that I can now explore and purchase from their websites. Online purchasing is just too easy. Have magazine and credit card; will post.

It comes as no surprise that the best designs endure and are valued as much today as they were when they were created and sometimes we are lucky enough to share vicariously in that envelope of design. I loved every moment I sat in the comfortable Eames chairs in my London home and they were a

silent spectator to some pretty momentous times, including when my son and I toasted his impending fatherhood and my grand-motherhood.

I envy my daughter who visited the British Design 1948-2012: Innovation in the Modern Age exhibition at the V & A in London. She emailed me saying it was like being transported back to her childhood, as she was familiar with so many of the pieces. It is difficult to pin down exactly why some designs endure, capturing our imagination. The beauty of practicality and purpose is just as absorbing as beauty of shape and form.  The attributes go beyond what is just funky, quirky or of the moment to become almost visceral.

I found one such delight while reading an Elle Decoration magazine from January this year. British designer Neil Conley’s snow domes 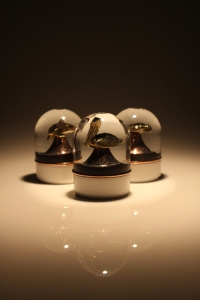 are beautiful,imaginative and clever with a wicked message. Each snow dome contains a hand carved pelican, turtle or dolphin in bronze, sitting atop a man-made stone. When shaken, black ‘oily’ snow settles over the threatened wildlife species in a reminder of the BP Deepwater Horizon oil spill in the Gulf of Mexico in 2010. Although the price tag of £2,000 is way beyond my pocket, I can still enjoy looking at them on his website at neilconley.co.uk. I am pleased I haven’t won Lotto as I would be sorely tempted to purchase one for my desk to replace their image.