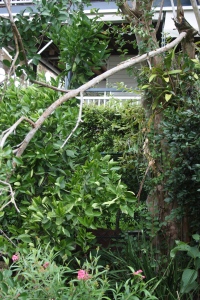 We lost a few small branches from some trees.

Normally we don’t celebrate Thanksgiving in our family but last night whilst preparing dinner I decided that in future I might do so. Earlier that afternoon a friend and I had driven down the range from Toowoomba and across the dry plains and watched two storm cells form off to the south.

Our hopes of out running the front were quickly blown away in as a cloud of dust and building material whirled up into the sky and across the road. My friend slowed down and we drove in the shadow of a semi-trailer hoping that not only would it shield us from any debris blowing around but also that it wouldn’t be pushed over on top of us. Huge gusts were buffeting the car and making us slide across the lanes.

The lightning was so bright that every time it flashed my friend cringed and clutched the steering wheel even tighter than she had been. Lightning flashed ahead of us and we were hit with a blinding downpour forcing some cars off the highway. 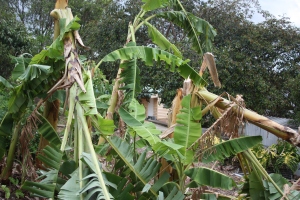 When we passed through the storm onto the suburban roads we found an obstacle course of vegetation and debris made more challenging due to the slippery surface of leaf litter and deep puddles. I was so relieved when at home I found how lucky we had been; apart from a few branches off the trees, lots of leaf litter, and a very wet deck our only problem was no power but twelve guests for dinner.

As our planned guests thought it wiser to stay with their children at home where there was power I offered dinner to my parents who also had no power. My husband  barbequed the ham which had been marinated in thai flavours, and using the last of the evening light I concocted a beetroot and carrot salad with coriander and lime plus a simple green salad.  In the peace after the storm, still with no electricity, we dined by candlelight offering a Thanksgiving toast to friends and family who were safe.

The flavours we used for the ham were very different to the traditional ham glaze but it worked very well. We pounded together: a red chilli from the garden, fresh coriander, a teaspoon of 5 spice powder, a cup of dark brown palm sugar, 2 teaspoons of ginger chopped finely, vietnamese mint also from the garden, three soft fresh kaffir lime leaves and lime juice to moisten the paste. We cooked the ham in the now hot BBQ for about 40 minutes. 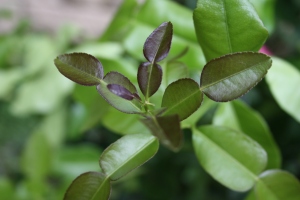 1 thought on “Thanksgiving after a storm”