I banned ‘toilet talk’ at the dinner table when my children were young but this was different. I had just suggested to the grandchildren they do a pit stop before going to the park and undertaking a 2-hour drive home. These children looked at me as if I was quite mad but having lived or stayed in many unfamiliar towns over the past couple of years, I was used to taking advantage of knowing where a toilet was before venturing out for the day. Los Angeles and London were fantastic, particularly their department stores. This made me think of tourists to Brisbane and my daughter who commutes between many cities and locations queried how would a tourist manage if they needed a toilet in Brisbane.

I could answer that easily as when I was potty training that daughter I think we visited every public toilet facility in Brisbane.  However, 30 years ago there weren’t many so I became cunning and learnt a few tricks such as going into the lobbies of the Sheraton and Hilton Hotels or the David Jones and Myer department stores. The other good option was the art gallery and museum on the other side of the river (if she could wait that long).  I certainly couldn’t rely on public facilities to assist. I remember the staff of the local library telling me that the toilet was for staff use only and that I would have to take my little girl elsewhere. Anyone who has had children will know that isn’t often an option so we charged outside to the nearest tree in the park adjacent to the library and I hoped the librarian was watching from her window.

Shopping with small children was always a fraught situation and expensive, as there is nothing subtle about three toddlers in a shop all needing to use the toilet. I have bought a lot of orange juices in my time. My grandmother used the term ‘Spend a Penny’ which I didn’t understand until I began travelling around Europe where it is common practice to pay to use a toilet facility although I think it is unfair that we women support the men who don’t have to pay to use the facility. Talk about gender inequality. 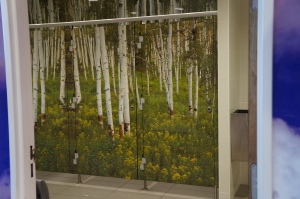 We have had some funny and peculiar toilet experiences in our travels.

I have been to beautifully appointed loos such as the Savoy in London but the prettiest were the doors of toilets at a service station on the A5 in France. The pictures of birch forests in the men’s and foxglove flowers (also called ladies’ gloves) in the girls’ were spectacular.

I was intrigued with the rotating toilet seat, which came out with a new disposable plastic cover. It was tempting to press the button just to watch its action as the seat disappeared into the wall and reappeared fully dressed.

My daughter and I also found ourselves standing in front of a rather confusing toilet which looked like a space capsule in a car park in Toulouse. Neither of us could work out how to get into the capsule until a homeless fellow sitting nearby took pity on these two pathetic women and showed us how to do it. Inside, it really did feel like a space ship as it was totally hands-free; the door locked itself, self-flushed, motion sensor water and soap control, and only after that did the door unlock. You had to be quick as after an allocated time the door opened automatically. After each person, the entire system was sprayed and sanitised, thus the name Sanisette.  That homeless person earned his tip from us that day.

The most surprising toilet was at Malpensa airport outside Milan. I am not sure whether it is a requirement of EU regulations but we discovered that the ladies’ toilets still has a squat toilet. This was a challenge particularly as we were wearing long high heeled boots and stove pipe jeans. I am not sure who laughed more, my daughter or me but my New Year Resolution is to improve the muscle strength in my quads by doing more squats.

I read recently an entry on aixcentric complaining about the lack of public toilets in Aix-en-Provence. My advice is to encourage the local council to begin a ‘Toilet map’ such as the one in Australia set up by the Department of Health and Ageing as part of the National Continence Program. So no, it wasn’t initially set up to assist tourists or parents of small children but who cares it is still a very useful map of where the 16,000 public and private toilets are located.  I think it is a brilliant idea.