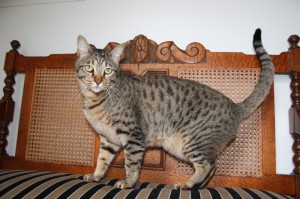 Despite my intentions of not being tied down to living in Brisbane how could I say no to my son and his Bengal cat, Colin.

Colin was intended to be company for my daughter-in-law while her husband was on an overseas posting for 5 months but this kitten hadn’t been schooled in the traditional characteristics of his breed and would dig his claws into any hand that came near him. We blame it on a ‘troubled’ kittenhood.  Tolerance levels and band aid supplies having been depleted, and with no medical cover for skin grafts, Colin was despatched to live with a friend in Brisbane who had already adopted one of my Burmese while lived in London. It soon became obvious that despite his bolshy adolescence, Colin was no match for a tiny grand-dame of 15 years who was not about to let just any fellow sleep with her mistress. Poor Colin again found himself searching for a home.

He moved in with our daughter for a couple of weeks and found, absolute bliss, she didn’t mind sharing her bed with a hairy beast that came and went in the middle of the night, but her professional lifestyle includes three or four days per week out of the country which meant that Colin was again living in a locked up unit.  Thus within two days of our arriving back in Australia, Colin arrived on the doorstep.

Bengals like to drink from running water, but I draw the line at a cat drinking from my bath, so I have invested in a seriously expensive water fountain, which he refuses to use. We have reached a situation where Colin sits in the bath, sans water, looking pitifully at the spout, miaowing gently until I eventually give in and turn it on. I have however, noticed dirty paw prints in front of the fountain which indicates that this stubborn cat might be using or at least contemplating a possible drinking alternative to dying of thirst in our recent 30 degree days.